In this post, you will learn about three ways to get hundreds of thousands of views on TikTok.

You will read about the impact

And also you will find out if TikTok makes sense as a marketing platform for your business.

I will tell you about it from the perspective of the TikTok platform user and marketer who can predict whether a given material will be catchy.

I will also show you examples of my ticks that have reached hundreds of thousands of views (one even 3 million) . On these examples, you will learn how to repeatedly earn millions of views and create viral videos.

When considering what drives impressions the most, let’s take a look at TikTok’s income source. Why is the company’s goal so important? You will find out later in the article.

The TikTok platform makes money from the fact that the user spends as much time on it as possible, i.e. he will watch interesting content interwoven with advertisements as long as possible .

Checklist - how to increase impressions

But for starters, I have a TikTok trick pill for the impatient. Write it down or print it out and use it before each recording!

How to get a million views quickly? I have listed a checklist of actions below.
Each of them increases the chance of appearing in DC (For You).

Three ways to increase your involvement on TikTok.

I also recorded material on this topic in the form of a video that you will see below. The content of the video includes examples, my talking head and funny inserts. Choose which form you prefer, or see both 😉

Get attention in the first second so that the recipient stays on for another second.

You can do it by showing something interesting, but not to show what will happen to this attribute, but only to make it interesting.

This will work like a headline in an article that asks a question that is answered in the negative, but our curiosity won’t let us pass by.

An example is tiktok, in which the person starts talking, then takes a sip of water, and we wait for the end of the sentence to sound.

Build suspense or put in a lot of action.

Dynamic shots and often cuts perfectly occupy the mind and do not allow the viewer to get bored, so he will not think about switching to the next video.

A good example here is the Friz or MrBeast videos from youtube, which, thanks to the continuous dynamics, even with materials over ten minutes, reach an incredibly high percentage of viewers, which is why they are promoted by this platform.

By breaking the film at the most interesting moment, we will force the viewer to watch the whole thing again, which will translate well into the screenings.

However, be careful not to irritate the viewer .

We can achieve a similar effect by adding a second inscription that someone will not have time to read and will have to go through the entire video again.

The answer does not only apply to TikTok, although in the case of this platform we can already stand out with the first movie, which is not so easy in other media such as YouTube.

We should create materials that engage the viewer and have the highest viewing percentage. This is what the entire platform depends on.

If we manage to create a material that exceeds 100% viewing – it is possible, because you can watch a given material several times . This chance that TikTok will display our video to other users will increase significantly.

We can only estimate how this translates into results.

Otherwise, the algorithm will evaluate it

The first material is likely to be rated better by algorithms, despite the fact that the viewership was „only” 95 percent.

On the other hand, it stopped the average viewer for as much as 37 seconds , while the viewer of the second film took just 10 seconds to make a decision.
He wondered whether to go to the next movie or disable the application – and this is an undesirable effect for the platform, hence he wants to avoid him at all costs.

Do likes and shares affect viewership?

How is it with likes and shares?

They can have an impact, but much less important. These elements can be easily manipulated by encouraging recipients to take specific action. As a result, platforms are not influenced by this indicator.

I am of the opinion that these factors also have little impact on YouTube, because they do not change the playback time, and thus the number of ads displayed along the way.

Shares on TikTok work in such a way that they increase the playing time of the video, because when we share the content is constantly playing in the background. Thus, they can indirectly influence the popularity of the material. 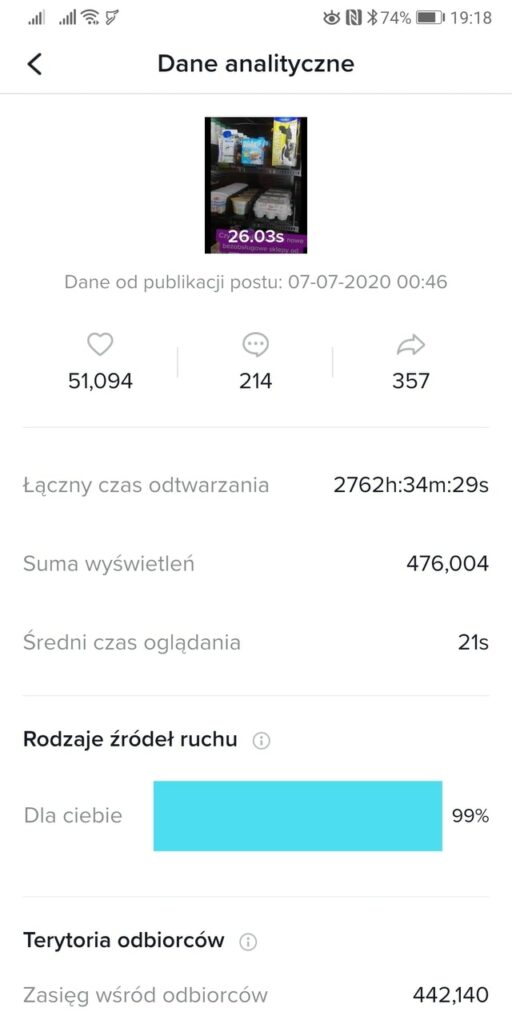 What movie to record? Three examples of videos on TikTok.

If you do not know what movies you want to record, consider whether you do it by force. Being unnatural and trying to achieve fame will be quickly exposed by users and even by algorithms.

If you’re comfortable in front of the camera (a phone camera is enough) and you’ve decided to record, you can start with one of the following three topics:

In addition, a great way to combine these categories is!

For example, you can record a tutorial on how to create a movie effect that you can use later to make a joke for your friend.

You can record a video explaining how to play the harmonica with a specific memic sound effect, which you will later put under a recorded matching funny situation from your life.

These are just two quick ideas, what will yours be?

Does TikTok make sense in business?

When considering whether it is worth using Tiktok to promote your business, let’s take a look at the people who are on this platform.

TikTok is an opportunity to gain high recognition among younger people.

According to the GetHero report, only 9.6% of tiktok people are 19 years old or older. It is relatively easy to build hype or a short engagement on tiktoku, unfortunately after these few seconds the recipient will probably move on to the next movie and forget about ours.

Therefore, in order to build a brand position, we have to appear in „for you” more often, which means we have to publish more often.

For example, by watching 10 minutes of YouTube video, customers will be much more engaged than after watching 10 seconds of video. However, watching the fifth ten-second movie, we will be better remembered by the recipient than when someone saw our episode on youtube only once.

This is due to memory processes in our brain that work in such a way that when we come back to something, it becomes imprinted in our memory more than if we saw it once. In my opinion, TikTok makes sense in business in two ways.

The first is when we make it ourselves and have fun from it. Perhaps we want to show the backstage of business. We implement our fun ideas and the effects are secondary, because we had a lot of fun doing it.

The second case, with paid advertising campaigns on TikTok , in which recognition is important. For example, we want customers to learn about the new flavor of crisps.

In the comment, write your nickname for tiktok and what you are recording, and let us know what you would like to know in the next post!

When creating a new online store, blog or landing page, we wonder if the speed of the website matters. How to create a fast website?